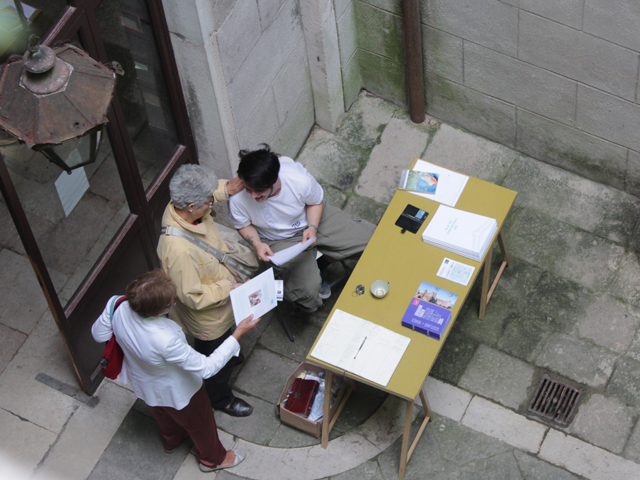 Since opening in May of this year Graham Fagen’s exhibition has received over 23,000 visitors through its doors all of whom have been welcomed by the Learning Team at Palazzo Fontana.

Hester Grant, a Moray College student, who was part of the team looking after the exhibition in September said:

“One of the best things about being in the gallery is the people you meet. It’s lovely to meet people from all over the world and see how much they appreciate the exhibition. So many people come back for a second viewing bringing more people.”

Polly Johnston, who is studying at The Glasgow School of Art, and was also part of the September team, tells us about a chance encounter which led to a visit to the gallery:

“Last week, I took a trip to the film festival at Lido and on the vaporetto home we were taking photos of this beautiful sunset, alongside a British couple. A couple of days later they came to the show. It was their last day in Venice and they said that they were so happy to have seen the Graham Fagen’s work, and what a breath of fresh air it is in this year’s Biennale.”

Arran Storey, was selected for the opportunity from Dundee and Angus College and has now returned to Scotland to start his first term at Duncan of Jordanstone College of Art & Design in Dundee; he understood early on what a special situation he was in:

“I realised that I really had to live every moment of my month in Venice because it was an unrepeatable experience to be staying in a Palazzo on the Grand Canal and being part of the amazing network of artists who were working at the other exhibitions. I got a lot out of those conversations.”

Jamie Kane is an artist based in Glasgow and one of the recent graduates who had come through Hospitalfield’s residency programme and was subsequently selected to be part of the Learning Team. Jamie recounted conversations which had unfolded within the exhibition space with Afghan Biennale visitors, Scottish journalists and cross-Europe hitch-hikers. He highlighted that the content of Graham Fagen’s work as well as the setting of Palazzo Fontana, with its eastern gemstones in the terrazzo floor, offered a rich stimulus for discussion of current affairs.

“The conversation really opened out the work for me as it not only became a stage set for the conversation but also made me think about how histories and displacement of artifact/ culture can be embedded within a place.”

The 2015 Learning Team is made up of 28 students and recent graduates from seven art and design schools across Scotland. For the first time the programme, a feature of the Scotland + Venice partnership since 2003, includes students from Dundee and Angus College (both Arbroath Campus and Gardyne Campus, Dundee) and Moray School of Art, University of the Highlands and Islands in Elgin, alongside students from City of Glasgow College, Duncan of Jordanstone College of Art & Design in Dundee, Edinburgh College of Art, The Glasgow School of Art and Gray’s School of Art in Aberdeen.

Image: Arran Story in conversation with Italian visitors to Graham Fagen’s exhibition, showing them information in Italian and asking them about their experience of the show as they leave, September 2015. Photo: Jamie Kane.